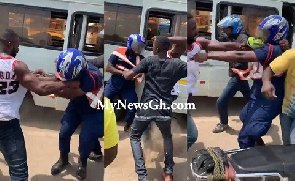 A commercial bus driver and his conductor who were captured on video assaulting a police officer would be put before court today [Monday].

This is according to the Public Relations Officer of the Accra Regional Command, DSP Effia Tenge.

She told Citi News that the police has taken a strong view against such acts of lawlessness.

Explaining the circumstances surrounding the assault of the officer, DSP Effia Tenge said the incident occurred when the driver was stopped by the officer after he disobeyed road traffic laws.

Citi News sources say the incident happened on Thursday, March 14, when the driver stopped in the middle of the road at Weija to wait for some passengers who were attempting to cross the road from the other side.

His action led to a build up of traffic leading to a minor accident involving a motorbike.

The assaulted officer who noticed the incident quickly went to the scene. The driver upon noticing the presence of the police sped off but was given a hot chase by the officer who rode on a motorbike.

The officer then ordered the driver to stop the vehicle and move with him to the police station but the driver and his mate refused and launched an attack on the officer, leaving onlookers shocked.

The officer called for police assistance, causing the two offenders to flee the scene, leaving behind the vehicle.

The vehicle was subsequently towed to the Odorkor Police Station.

According to DSP Effia Tenge, “the police is appalled by the kind of growing lawlessness especially by drivers and motorists on the routes of Accra and to a larger extent the entire country.”

“The police administration and the regional command will like to state that this kind of growing lawlessness will not be countenanced and these people will be made to face the full rigors of the law.”

He revealed that the vehicle owner had since reported to the police station and the driver and his mate have also been been arrested by the police.      Policeman brutally beaten by young men