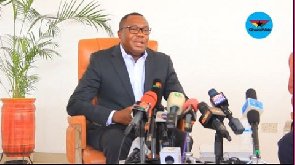 A private legal practitioner says he is convinced the police will be embarking on a wild goose chase with the charges proffered against National Democratic Congress (NDC) chairman, Samuel Ofosu Ampofo.

Mr Yaw Darkwah who is a criminal lawyer said the difficulty that may arise for the police would be the onus to “prove beyond reasonable doubt that indeed, the NDC Chairman had intended to carry out the plot”.

The CID has said the docket on the case had been sent for allocation which will determine the type of court the case would be heard and the date for him to appear before it.

But speaking on Adom FM’s morning show, Dwaso Nsem Monday, Lawyer Yaw Darkwah said the Attorney General will find it very difficult to prove its case based on the leaked tape.

Rather, the Criminal lawyer suggested, the police should have charged Mr Ampofo with a public order offence like an incitement of violence where it would be easier to get a conviction.

“Police will find it difficult proving such a crime, especially based on the tape. I don’t think the charges will fly,” he added.

Lawyer Darkwah who is also a lecturer at Central University even though he may not be privy to the evidence available to the police he would urge them to prepare very well ahead of the case in court.